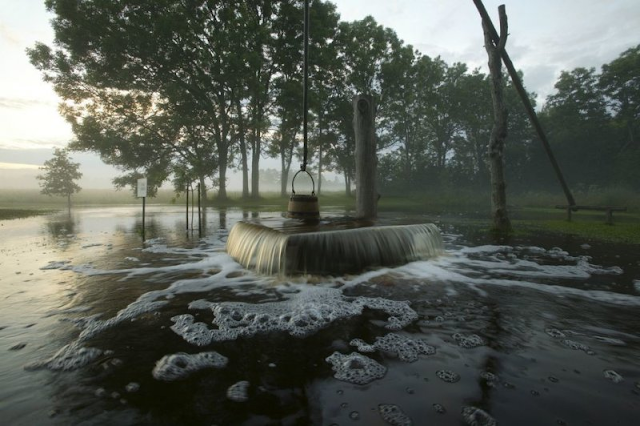 Estonia is a country in the Baltic Sea in northeastern Europe.  Tuhala is a beautiful village in the northern part of the country.  The village is full of vegetation.  In the midst of this boundless beauty is a mysterious jungle.  In the middle of that forest there is a man-made well, which everyone calls ‘witch well’.  And because of this well, Tuhala is a well-known name in Estonia.

The story is like this- in the middle of the rainy season, the moonlit night.  Around the forest, in the moonlight, the plants are silently wrapped in sheets.  It was as if a group of witches were looking for such a beautiful environment, they came down in the middle of the forest.  After a while, a well fell in sight.  The witch became quite fond of the well.  They reached the foot of the well.  They dipped their heads in the water with great joy and started playing.  But their joy did not last long.  Suddenly they started quarreling among themselves.  As a result, war started among themselves.  One attacked the other and sat down.  And in the throes of this attack, water came up on the well.  The well began to fill up with unobstructed flow of water.  This war of witches does not want to stop!

After reading this story, many people may be overwhelmed.  But there is no reason for ordinary villagers to think differently after seeing such an incident of well water.  That is why the name of this well became Daini Koop.  And many of the people of Tuhala believe in the folk tale.

About three thousand years ago, when there was a water crisis in the village.  The villagers went to find the source of water and inspected the place to see if there was any possibility of getting water.  Water was found after digging a little.  The well did not need to be dug too much.  This well is only two and a half meters deep.  A wooden bucket is hung over the well.  At first, this well was meeting the demand for water quite comfortably.  But one day a villager came to fetch water and saw water coming up from the well.  Seeing this scene, he could no longer restrain himself.  He ran to inform everyone in the village.  The news did not take long to reach the ears of the villagers.  At once everyone came to see what the main event was.  You can't believe it without seeing it with your own eyes.  Everyone in the village came to the well and was quite surprised.  Everyone saw the truth.  In fact, water is overflowing from the well.

The only question in everyone's mind then, why is so much water coming?  Fear was born without finding any answer to the question and a folktale was created.  There are also many more interesting thoughts about this well.  Many say that they saw fireballs fly over the well at night.  Again, many think that this well is a miracle of the Creator, which has flowed into the village as a blessing.

But it is not surprising to see this with your own eyes.  When we can't come up with a scientific explanation for something, we end up believing it to be a miracle.

Soon the news of this well in Estonia spread everywhere.  As a result, tourists from different places flock to see the uninterrupted flow of water from this well.  But the funny thing is, the well water that comes out in the twelve months of the year is not.  The water of this well comes out mainly in winter and rainy season.  But when the water comes out, it spreads all around.  It becomes like a pond around the well.

It is thought to emit 5,000 liters of water per second.  There may be a continuous flow of water for one to three weeks.  The bucket above the well looks a lot like a witch's cage.

Many scientists have noticed this phenomenon.  Many archaeologists also came to examine the well.  Many searches and researches are done to find the source of water in this well.  According to them, the main secret of the well is hidden in its geographical structure.  Located north of the Baltic Sea, Estonia is surrounded by many rivers.  Similarly, there are many small rivers hidden in the underground of Tuhala region.  There is a lot of snowfall in these areas in winter.  During the day the ice begins to melt under the influence of the sun.  This ice melt water continues to flow into the underground rivers.  As a result, the water level of all these underground rivers has increased a lot.  And when this well is dug, the well somehow coincides with one of the branches of a river.  As a result, when the flow of water in the river increases, the water overflows from the well.  And the matter of rainy season is easily understood.

There are many things that seem miraculous to us behind the scientific explanation.  But when the correct explanation of it comes out in the language of science, a real explanation of all miracles is found.

However, the question still arises in the minds of many, how could such a well be dug on the ground so many years ago in such a delicate way to match any branch of the river under the ground?  How did the foot of the coyote meet a flowing branch of the river?  However, coincidentally and according to the plan, for some miraculous reason that this water is not rising from the ground, it has been thoroughly tested.

The witch coupe has opened an unobstructed door for Estonia.  In 2012, the Estonians claimed this well as their best surprise.  As a result, people's interest in this well is increasing.  So many people from home and abroad are coming to see this wonder of nature.

Mystery stories and novels we all love to read.  And like all those stories, the world of our imagination is often a mystery created in reality with the help of imagination.  And this well of Tuhala village is a strange wonder of nature surrounded by such mysteries.

Rare Historical Photos- Must See Before You Die Click Here